My name is Dan Hrach (pronounced ‘rock’) and I have been pastor of Summit since July 10, 2012. I am truly excited to be ministering with this wonderful church family – and we would love to have you come and see what God is doing at Summit! As a part of being in God’s great church family we continue to walk in – shine out – and live as the light of Jesus Christ to not only our church family, but throughout the community and in the world around us. I believe you will discover this as you visit us at Summit. Come and be blessed! See you soon! 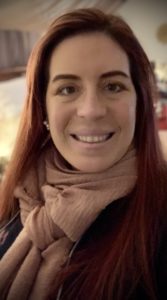 Liz Huggins-Bridges, comes to Summit from Fredericksburg, where she lives with her husband, three children, and her cats. Liz is an experienced office administrator. She started her professional career as a high school English teacher and taught 10 years before retiring. She then went into adult education and finally to her career goal of office management. She has helped to grow multiple offices and is skilled in online marketing, program management, human resources, program development, training, and day-to-day office management. She also is currently enrolled in a Masters of Arts program, at Liberty University, for Clinical Mental Health Counseling. Liz hopes someday to add Pastoral Counseling to her repertoire, in addition to church administration. Liz is a woman of faith who believes all the blessings in her life come only by the grace of God. She is eager to join our Summit family, meet our congregation, get immersed in Summit Presbyterian Church’s community, and help in any way she can.  Please stop in and introduce yourself to Liz! Leslie Marangoni is a native of Flint Hill, Virginia, and holds music degrees from University of Mary Washington and Bowling Green State University (Ohio). Although she aspired to life in academia, God had different plans; as a result, Leslie has worked in church music since 2000. Since marrying Guy and moving to Stafford in 2004, Leslie has served as organist and accompanist at several area churches, including Falmouth Baptist, St. Peter’s Lutheran, Trinity Episcopal, and Hope Presbyterian (Fredericksburg). She happily landed at Summit in September 2021, and discovered that Summit offers the loving, welcoming church family for which she has yearned. When she’s not banging on random keyboard instruments, singing to herself, or causing the choir to wonder what she’ll do next, Leslie studies Isshinryu karate, chases her kids around, digs in her garden, and cooks. Larisa Felt graduated from the Music College and Pedagogical University in Latvia. Larisa’s first job since arriving in the United States in 2000, was with Hampton University in Hampton, Virginia. She has been serving as a pianist at Summit since 2003, along with working as a piano instructor at Stafford Music. Her husband is retired from the Air Force. Larisa has a step-daughter who is a graduate of George Mason University and a son who is a Navy veteran. As an advocate for Conscious Discipline as well as loving and respecting God’s world around us, Ebonee is grateful that she has found Summit Presbyterian. Ebonee graduated college with a B.A degree in Educational Studies and Psychology. She has been working closely with children of all ages since 2008 and has no intentions to stop any time soon. She started as a Teacher’s Assistant and worked her way up to roles such as the Director of Operations in a preschool with over 130 students and is thriving as the Director of School Family with her current school.
Ebonee believes that her knowledge of Conscious Discipline along with her focus on creating socially and emotionally intelligent learning environments and character development for all learners will create a beautiful blend with Summit. She is excited to further her learning about Youth Discipleship alongside the curious students, families and wonderful staff. Ebonee is eager to take all that she learns from Summit and implement the philosophies with her two young children and husband. Ebonee is honored and ecstatic to be a part of the Summit Family.